“27 Santas and an Elf Called Kevin” is an original musical for the whole family about “saving the magic of Christmas” by Sesame Street, Madeline and Strawberry Shortcake songwriter Andy Street and Jonathan Kydd. A limited number of photos with Santa are available to ticket holders.

And it is up to Kevin the Elf to rally the troupes and save the day!!!

But look out, Santa’s under-appreciated brother, Gunta, might ruin everything… 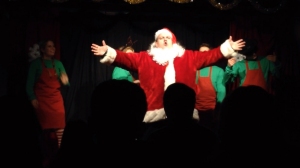 ANDY STREET, for the past few years has
worked on the popular show, American Idol,
as musical associate and vocal coach.
Television programs featuring the music of
Andy Street are watched in over 100 countries
throughout our world. His compositions,
arrangements and musical direction have
won many major industry awards in England,
Europe and the United States. Increasingly in
demand in the U.S he composed all the
music and songs for “Madeline” an animated
series which won a Cable Ace Award in 1994
and an Emmy in 2002. Other work on
animated series includes “Hurricanes”,
“Double Dragon” and “Ultraforce”. Further
animation includes many series of
“Strawberry Shortcake” a huge hit around the
world, and recently “Angelina Ballerina” which
airs on PBS in the USA.

JONATHAN KYDD Hi there. I’m an actor. But I
also voice stuff and make films and videos
and write songs . Which I then perform (in!). I’
ve written three musicals and a variety of hour
long shows featuring comedy bands (which I’
ve been in) and a number of video blogs,
mostly about football. I’ve also made two
comedy short films and a lot of videos. I
podcast about football as well. This site
attempts to reflect all these diverse things I
get up to that are still all entertainment
based! So there are many vids and sound
clips and voice over segments and short
films and songs I’ve written or been in or
sung or am in or doing at this moment!

RANDY DONALDSON Producer: The
Scottsboro Boys (12 Tony Nominations,
including Best Musical), The Pee Wee
Herman Show (Broadway).  Triassic Parq
(Off-Broadway), Falling for Eve (Off-Broadway)
and the upcoming Broadway play Mr Rickey
Calls A Meeting.  Associate Producer Falling
for Eve at The York Theater. As a performer
Randy has appeared in 11 Broadway/
National tours including; Tommy Keeler in
Annie Get Your Gun, Banzai in The Lion King,
Wonderful Town, and Richie in A Chorus Line.

Kelly Dacus-Smith (Choreographer)
graduated with a degree in musical
theatre from Webster University then
spent the next 15 years living and
pursuing her dream as an actor in New
York City.  Over the years, some
favorite roles performed include
Gladys in Pajama Game, Kristine in A
Chorus Line, Val in A Chorus Line and
Anna in The Baltimore Waltz.  She has
now retired to the quiet town of Sparta,
NJ to raise her own two performing
children where she also teaches,
directs and choreographs at Acting A
Part.   Much thanks to Randy and Andy
for bringing me on to make the elves
dance.

Kimberly Lyons (Production Designer)
lives in Los Angeles. This is her New
York debut. Previous designs include
Harvey, Thoroughly Modern Millie,
Sing! Sing! Sing!, A Christmas Carol,
The Fungis,  and Shakespeare’s
Twelfth Night. Along with designing she
teaches scene painting for UCLA, and
Cal State Fullerton. As well as working
in TV and film in LA. She had an M.F.
A. degree in Set Design from California
Institute of the Arts.

Samantha Fremer (Production Stage
Manager) is an Ohio native, Otterbein
University graduate, and office supply
aficionado. She has spent most of the
past three years working at The Public
Theater, where her credits include:
The Fortress of Solitude, King Lear
(Shakespeare in the Park), The
Library, Fun Home, and Here Lies
Love. Additional stage management
credits: This Time (Rising Circle
Theater Collective), Three Graces
(Immigrants’ Theatre Project & Ice
Factory), and Encore! Fifty Fabulous
Years (Cape Fear Regional Theatre).
Thanks to Becca, Liz, Reece, and Mom
for their unconditional love and
support!

Walt Frasier is excited to be playing Santa /
Gunta again. Walter has been with this project
from its earliest inceptions developing
workshops and showcases with production and
writing team. When not dressed in Red, Walter
can be seen in NYC and touring nationwide
perform with EIGHT IS NEVER ENOUGH Improv
(AKA LMAO Off Broadway, Improv 4 Teens, Improv
4 Kids). Watch Walter now on Netflix’s
Lilyhammer (Comedian in Season 3 Episode 8
Nov 21, 2014). Earlier this year Walter was saved
by DR. Hank on USA’s Royal Pains. TV Blue
Bloods, Letterman, MTV, WE, NICK; Off
Broadway, Touring and Regional Theater Credits:
Favorite rolls include Harold Hill (Music Man),
Henry VIII (Man for all Seasons), Prince (Student
Prince), Molokov (Chess).

Patrick Reidy (Kevin / McNasty) is a current
improviser for Eight Is Never Enough, LMAO, and
Improv 4 Kids both in NYC and touring nationally.
He is also a co-creator and performer for the
musical improv show Big D & The Closers.  As a
comedian, his sketch writing and performances
have been featured on the Huffington Post,
College Humor, and Funny Or Die.  For more
information visit www.thepatreidy.com or follow
him on Twitter @ThePatReidy

Elizabeth Greenfeld (Pru / Cheese Man) is happy
to be spreading holiday cheer!  She has been
working as an actress in NYC since the fall of
2001, and always enjoys being an elf. Thank you
to Lee for love and support.

William Goulet Kean (Mitch / Bob) is an
actor/singer/comedian living in NYC. He received
a BFA in Acting from NYU:Tisch. During his time
at NYU he studied at the Strasberg Studio,
Stonestreet Studios and the Barrow Group as
well as going all the way up the improv programs
at both the Magnet and UCB. He’s been a lead in
two network pilots that weren’t picked up as well
as over 30 commercials and many independent
films. When not acting for the camera, he studies
opera under Scott Flaherty and performs improv
with Improv4Kids. You can see more at
www.WilliamGouletKean.com.

Laurice Fattal  (Jill / Charlie) has been
performing in theatre, music concerts, and stage
shows since the age of 10. She originally began
writing scripts and composing music through
her  own vocal group in high school. She
continued to pursue her passion for the
performing arts in college through studies in
theatrical production, acting, music and opera.
She has worked in casting, directing, and writing
with professional companies based out of  NYC,
MD and DC. Laurice has written and performed in
dozens of sketch comedy digital shorts for
LMAONYC. Other credits include the Indie short
mockumentary: P.O.O.P: The Movie, Writer/
Director of The Top 8 at Eight (original web
series), Fox & Friends; Musicals/Operas: Amahl
and the Night Visitors (Riverside Opera NYC),
Alice in Wonderland – A New Musical, The
Phantom Tollbooth – By Sheldon Harnick, The
Lounge @ Under St. Marks. In  addition to
developing the concept for “Eight is NEVER
enough!”,  she is thrilled to be the co-founder of
“IMPROV 4 Kids!” and Bully Assemblies NY  –
both are outreach programs that currently tour
K-12 school

This site uses Akismet to reduce spam. Learn how your comment data is processed.