Since 2015, ELFPROV has entertained families in Times Square, AKA Breakfast with Santa. This show will return to the Broadway Comedy Club ASAP but for 2020, join us online for a fun interactive show featuring our funniest Elves performing interactive skits and songs improvised base on audience suggestions and participation.

CLICK HERE for tickets. Just $30/family (Regularly $25/guest for live show) $50 VIP includes private chit chat with Santa after the show to share wish lists. You can record your private experience with Santa via ZOOM.

Join Santa and Mrs Claus as they sing LIVE with Santa at the piano. Get the whole family together, set out some cookies and milk, and sing a long.

CLICK HERE for tickets. Just $20/family. $30 VIP includes private chit chat with Santa after the show to share wish lists. You can record your private experience with Santa via ZOOM.

Santa will meet with your family for up to 10 minutes for just $25.

Let the North Pole’s experienced event managers host your family, school, office or community group for a safe socially distanced private party. Bring together folks from around the world. Santa can lead a Christmas carol sing along. EMAIL for more info

A division of Improv Theater LLC

Still need a Santa – We have a few holes in the calendar. EMAIL ASAP eightimprov@gmail.com

Don’t miss out on one of NYC’s top Santas!

Rate below for Manhattan. Outside boros and surrounding counties may require additional travel cost/time. Email us requested times and character needs for the best quote eightimprov@gmail.com
SANTA Weekends in December $250/1st Hour (Friday 5pm THROUGH Monday 9am)
SANTA Other Times $200/1st Hour
OTHER CHARACTERS when booked with Santa just $150/1st Hour/performer – Elves, Mrs C, Carolers etc
ADD $100/ Additional consecutive hour (any day/time)
AS ALWAYS, the bigger the schedule with anyone client the better the deals Santa can do.

Great for public and private events for all ages!!! The elves love to play games, and in this show they get the audience involved to create original stories, scenes and songs.

Attend our shows in Times Square (CLICK HERE FOR TICKETS) or bring to your next event.

Every Saturday morning Santa welcomes all to share their holiday wish lists while he poses for family photos and shares a Continental Breakfast (see below). Then Santa and the Elves present ELFPROV, an interactive holiday themed comedy show for all ages. The morning ends with Santa leading a few songs before taking off to get ready for Christmas Eve.

Here is how each morning flows…

Lobby/Holding room opens at 9am. We don’t want early birds out in the cold.
House opens at 9:30.
Come early to meet Santa and take pictures. Bring your holiday wish lists and be ready to whisper in Santa’s Ear the #1 item on the list. Bring your own camera. Elves will help take family photos. We will also take pictures and post online for free download. We do not have printed pictures to take home. There is a continental breakfast served of mini rolls, donuts, muffins, yogurt, fruit, cheeses, coffee, juice and bottled water… Oh and of course Santa always has a few candy canes and other sweet options.

The Elves have a great show for all ages, creating original songs, stories and skits based on your suggestions. OK to take photo and video as your loved ones get on stage to participate….

10:45 Santa will lead a round of Carols. Hope all are warmed-up and ready to sing along. This helps all get higher up on the list of good boys and girls.

FYI The show often starts late when the show is sold out. Santa will not let the show start until every child in line has had a chance to say hello. But due to a busy holiday schedule, Santa cannot meet with late comers after the show so PLEASE be on time. Santa hates to disappoint the children because the parents were being naughty.

ELFPROV A division of Improv Theater LLC Check out the website for great shows year round. http://www.newyorkimprovtheater.com

“Go Tell It on the Mountain” is an African-American spiritual song, compiled by John Wesley Work, Jr., dating back to at least 1865, that has been sung and recorded by many gospel and secular performers. It is considered a Christmas carol because its original lyrics celebrate the Nativity of Jesus: 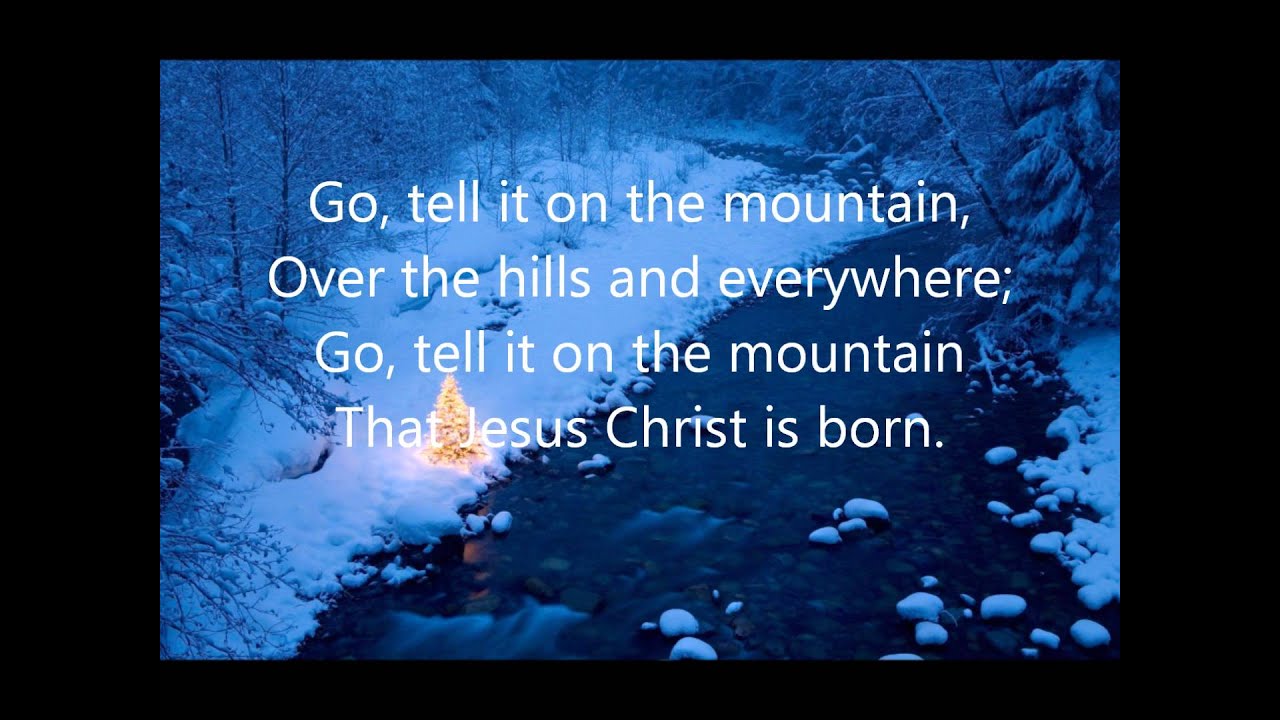 (c) 2012 SGF PRODUCTIONS http://www.fpny.org
All voices sung and tracks created by Walt Frasier http://www.waltfrasier.com
Public Domain. No other can claim rights to this recording.

‘Twas the night before Christmas, when all through the house
Not a creature was stirring, not even a mouse;
The stockings were hung by the chimney with care,
In hopes that St. Nicholas soon would be there;

The children were nestled all snug in their beds;
While visions of sugar-plums danced in their heads;
And mamma in her ‘kerchief, and I in my cap,
Had just settled our brains for a long winter’s nap,

When out on the lawn there arose such a clatter,
I sprang from my bed to see what was the matter.
Away to the window I flew like a flash,
Tore open the shutters and threw up the sash.

The moon on the breast of the new-fallen snow,
Gave a lustre of midday to objects below,
When what to my wondering eyes did appear,
But a miniature sleigh and eight tiny rein-deer,

With a little old driver so lively and quick,
I knew in a moment he must be St. Nick.
More rapid than eagles his coursers they came,
And he whistled, and shouted, and called them by name:

As leaves that before the wild hurricane fly,
When they meet with an obstacle, mount to the sky;
So up to the housetop the coursers they flew
With the sleigh full of toys, and St. Nicholas too—

And then, in a twinkling, I heard on the roof
The prancing and pawing of each little hoof.
As I drew in my head, and was turning around,
Down the chimney St. Nicholas came with a bound.

He was dressed all in fur, from his head to his foot,
And his clothes were all tarnished with ashes and soot;
A bundle of toys he had flung on his back,
And he looked like a peddler just opening his pack.

His eyes—how they twinkled! his dimples, how merry!
His cheeks were like roses, his nose like a cherry!
His droll little mouth was drawn up like a bow,
And the beard on his chin was as white as the snow;

The stump of a pipe he held tight in his teeth,
And the smoke, it encircled his head like a wreath;
He had a broad face and a little round belly
That shook when he laughed, like a bowl full of jelly.

He was chubby and plump, a right jolly old elf,
And I laughed when I saw him, in spite of myself;
A wink of his eye and a twist of his head
Soon gave me to know I had nothing to dread;

He spoke not a word, but went straight to his work,
And filled all the stockings; then turned with a jerk,
And laying his finger aside of his nose,
And giving a nod, up the chimney he rose;

He sprang to his sleigh, to his team gave a whistle,
And away they all flew like the down of a thistle.
But I heard him exclaim, ere he drove out of sight—
“Happy Christmas to all, and to all a good night!”